Ruby and the Rockits 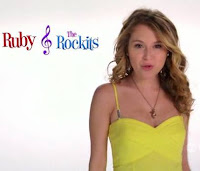 David stars with his half-brother (I hate that term), Patrick in a new sitcom, written and produced by another brother, Shaun. Frankly I think the Cassidy boys have a real gem on their hands. I've really enjoyed "The Partridge Family" and have had a real festival since the series was released on DVD's.

Shaun is really the amazing one here. Look at what this Hardy Boy has produced in the past! Roar (1997) which I think is one of the best fantasy adventures ever made, a few of the American Gothic episodes (1995) which is still part of my nightmares, Invasion (2005) and a host of other drama episodes around the tube. Now he's gone from dark dramas to a light, uplifting comedy! Amazing switch-over.
Here's a screen capture of David from 1970:

And here he is from the 1st 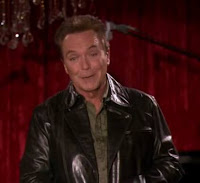 David's still got it as far as I'm concerned. The singing voice is still going strong as he turns 60. I know he's had his issues, but this show proves real talent never leaves. And should have been around on TV about ten times more than he has been.

Brother Patrick has been all over the TV screen since 1980, never anything major, but he must be good to be able to work so much in so many dramas. I just never knew he had a singing voice!

How and why did they leave out the 4th and youngest Cassidy brother, Ryan? He's got to become a regular or a re-occuring guest star on this series, come on Shaun, let's make this a full family affair.... and you're Mom, Shirley's still got it too!

David's "daughter" in the series is played by Alexa Vega, I just knew I knew that face from somewhere..... that's our Spy Kid (Carmen) all grown up, OK, at least to age 21, playing a teenager. And again, I would have never guessed that she had such a voice either.

This series is a gem. My advice to the ABC (Always Bloated Crap) Family channel is to dump the other garbage and lean heavy into this one. In comedy, timing is everything. I have always considered David as having it, now I see it's a family trait and the cast 'family' is catching it as well.

Since Canada's "Corner Gas" stopped production I didn't think I'd ever find another new sitcom that I would enjoy. Sure am glad I kept looking and I will keep looking at this one every week. Looking forward to Alexa and cast's music CD release... it has to happen!!

Update May, 2010: Kinda let things slide a bit and not posted anything for ages. What is totally official is that "ABC Family" (A New Kind of Family) axed this show. It did not fit into Disney's new idea of "Family" since there was nobody having sex with under-age teens, no sodimites, not even the dad was having sex with his kids.... just not what ABC Family wants to shove down our necks. Well, the ONLY show I've ever bothered to watch on their network is gone so I've even removed the channel from my lineup so my remote just passes it by. I'll stick with the Original Kind of Family myself.
Posted by WaveThemes at 8:23 AM No comments: 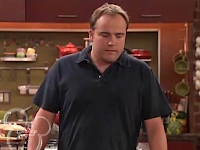 Posted by WaveThemes at 5:26 PM No comments:

Where are we going and Why am I in this handbasket?

I LOVE old classic TV Shows! Comedy (Sitcoms), Cartoons, Sci-Fi, Adventure! Not just here in the USSA, but from England, Canada, Australia, New Zeland just to name a few. Started out just collecting audio tracks of the show's themesong. Then faster PCs came along, faster internet connections, larger hard drives and Multimedia and I've started collecting the full episodes too! I perfer TV Captures, and if the commercials are there, that's even better! Yes, I like old commercials too, often they are better than the show.

OK, I'm most easily found in the newsgroups. alt.binaries.classic.tv.shows is one place I look for messages, requests. If you're looking for a TV Themesong, then start your journey at www.wavethemes.org - it's been around for over 15 years now. There's so many that moving around might be tuff, but there's a ton there. These are in a MPeg-Layer 3 waveform .wav format. Some players will not work with these now without tweaking. If you're not in the mood to play geek and mess around then just rename the files from .wav to .mp3 and they will work.
OK, why not store them as .mp3 in the first place? Well, the site is called WAVE Themes, not MP3 Themes. Started this site out long before the mp3 experience started and it's just the way I want to do things. I'm too old of a dog to change tricks now.
Posted by WaveThemes at 8:00 AM No comments: