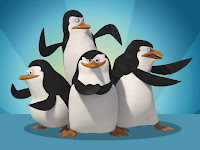 This is really a rant! I'm caught watching this cartoon all the time, I love it! This is not about the art, the stories, or production but rather trying to get a real list of episodes! You Can't Do It!! Every English-speaking country has been getting these episodes in different order, some episodes appear here, not there or there and not here! In the USA I've counted 14 episodes that have not appeared here, ten of those have yet to appear anywhere!

And so far season 2 is over 18 months long! Just yesterday (August 20, 2011) there was another 1/2 hour special which Nick advertised only for a few days. The ads call it "Operation: Vacation", the title card in the episode says it is "Hoboken Surprise" and neither title can be found on any of the five episode lists I try to follow!! TIVO called it season two.

At the end of the show there's an ad for a September 9, 2011 1-hour Penguins of Madagascar special featuring the return of Dr. Blowhole and guest-stars "Alex the Lion". Just wonder if 'they' consider this the end of season two (Finally!) or the start of season three (Finally!).

Last week Nick gave up 5 new single episodes (for my area anyway) and 1 30-minute special for Earth Day. I noticed on TiVo that 4 of six had a season 3 tag! While that’s great, all six of the episodes had a copyright at the end of 2010. This is giving me hope that it is not the end for this series yet I wonder if any really new episodes have been produced or if Nick has just rat-holed some episodes and are releasing them a few at a time with this batch an advertising tie-in to the new Madagascar 3 feature film that my grandson is jumping up and down waiting for.

There’s no ‘official’ word from Nick on this but I think we’re at the end for this cartoon. The toon is totally off the Nick schedule and is only on the Nicktoons line-up. Over at Dreamworks I’ve noticed that all the names associated with the series are now very busy with various new projects. If this is the case, it’s been a great ride and the last episode they showed was just as fresh as the first which is a rare thing indeed. I still have a list of some episode titles that were secured copyrights but not shown (at least in my area) so maybe there will be some new treats in the future.

Posted by WaveThemes at 12:21 PM No comments:

TLC started up a Reality Series with host Billy Ray Cyrus called "Surprise Homecoming". It's a great 'feel good' series where secret arragements are made for a Military member to be able to make a surprise visit to a loved one or two or three and so on.
It's the only Reality Series I've bothered to watch more than 30 seconds of since the start of this reality craze years ago.
What really burns my knickers is that this is about the only series that TLC has ever tried that is not trying to re-educate people to what the liberal left wants or trying to make Christians the bad guys and just tearing down the moral fiber of this country.
They must know it because you can go to their site and find out tons of information on all their shows on the schedule ----- except for this one! It's on the TV Schedule but it you want infomation about the series you have to go and google it (or yahoo it). Maybe 'they' are just working on a page for the show.
If you love our G.I.'s like I do, don't miss this show. It's great to see the support system that so many family members have. God Bless each and every one of them!
Posted by WaveThemes at 4:41 PM No comments: